For the second consecutive year Neutral Fuels has been awarded the Golden Shield in Sustainability and a Certificate of Excellence from the Arab Organisation for Social Responsibility. 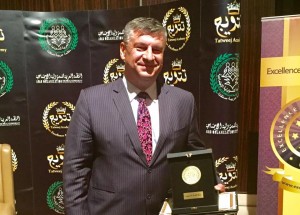 Karl Feilder, CEO and Chairman of Neutral Fuels, said, “Last year when we won the Golden Shield for the first time I felt more pride and humility than any other accolade I’ve ever received. This year I feel even prouder because this second award demonstrates that others really understand that our sustainability mission is itself sustainable.

As for humility, Feilder had always said that although he looks and behaves like a businessman he is a climate activist who just wants to save the planet. “I loved this year’s awards ceremony because I spent the evening sharing “save the planet” stories with other organisations and governments that, like ourselves, are really making a difference to the health of the planet and future of our children.”

Neutral Fuels has converted millions litres of used vegetable cooking oil into biodiesel and is well on its way to achieving the 6 million litre milestone this year.

“Nothing says commercial viability louder than this figure,” said Feilder. “It proves that biodiesel usage is on the increase in Dubai. This award is as much for our customers as it is for us. They are helping to put the UAE at the forefront of creating sustainable, modern and clean cities.”

Using biodiesel made from used cooking oil reduces the creation of greenhouse gases in the atmosphere by over 95% compared to petro-diesel. Moving to clean biodiesel means less CO2 being emitted into the atmosphere, which is a significant step towards our vision of creating a sustainable future for our children’s children.